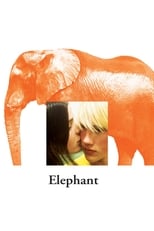 
It follows a whole bunch of high school students on a normal day in the USA, following their normal routines, going to their normal classes, and sitting in their normal seats in the cafeteria. Until suddenly, after having followed John, Eli, Michelle, Carrie, Nicole and Brittany, and learnt about the little slice of their life that you see, you notice a glimpse of Alex and Eric. Alex and Eric are not like everyone else; Alex and Eric are angry, and  they have decided to do something about it.

The film is part of a trilogy (titled the 'Death Trilogy') based largely on real events; in this case the 1999 Columbine massacre. I think this must have been amongst the first major(-ish) films to show a school shooting since then - controversial enough that it won the Palme d'Or at the 2003 Cannes Film Festival. Impressively, it starred mostly non-professional, or new actors, and I think it works so well for the film - no artifice, no trying too hard, just normal everyday kids.

It's the little things that get you in this film; John's resignation when he's told off for being late for what we assume is at least the tenth time, Michelle's embarrassment when her gym teacher tells her she must wear shorts for class, Eli explaining his photography project over and over to his subjects. The three girls in the cafeteria reminded me painfully of the discussions me and my friends would have when one of us had a boyfriend. It's all just so painfully...human. Ain't that the tragedy.