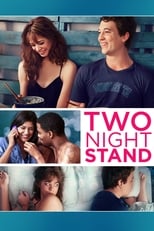 
This can be credited largely to the actors – the premise is not the most original. A one night stand is turned into a two night stand by a snowstorm battering New York so two people who don’t know each other at all are almost forced to talk out of the sheer boredom of being the only two people in one apartment unable to leave. Miler Teller (from Whiplash, Divergent, everything, ever…) and Analeigh Tipton (who I find really endearing – was she this good on Cycle 11 of ANTM? Because then I might have to watch that one) really elevate this material, bringing a kind of spark to the dialogue that, while it isn't the most realistic, brings a sense of fun and absurdity that is almost in on the joke. I can’t really tell you at what point I started rooting for them – the shift is so gradual as to be almost imperceptible – but I can tell you that by the end of the movie I actually screeched noooo! when it all seems to be going wrong.

This film won’t change your life. But it is hella cute. Seriously, watch this and let it put a smile on your face. Because it will.

PS: Also, Kid Cudi! Be in more stuff, dude. You are great.