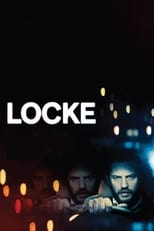 
This film is eighty-four minutes of a man in a BMW, driving down the M6 (I think? I was guesstimating anyway and my geographical knowledge is for shit so I took a punt), taking and making calls. Other than Ivan Locke, you see nothing else, apart from exterior shots of the car on the motorway.

Whilst I love one-man films in general – Castaway (2000), Moon (2009), All is Lost (2013) – what I really love is when that space is severely limited – Phone Booth (2002), 127 Hours (2007), Buried (2010). It think it forces everyone involved to up their game, making a ninety minute film into a complete showcase for what that actor can do, turning it into an absolute masterclass. Locke definitely belongs in this category.

Throughout every minute that you see him, you are learning more about Ivan Locke; about his job, his family, his passions, his insecurities, his morality, his contradictions, his history, and just how far he can be pushed before he might lose it. Tom Hardy is sublime. This might be my favourite performance from him, ever – he effortlessly draws you into the confines of the car with him, until you begin to speculate on the reasons behind this turn of events that see him driving to London yourself, until you begin to have your theories confirmed or debunked by the story as it unfolds.

Go out and see this now. It’s a tightly plotted, incredibly well drawn, gem of a film. May it turn you to a Hardy fanatic too, so you can join the rest of us!