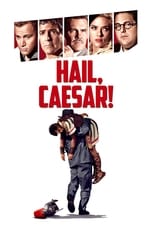 This film is…this film is…kind of…exactly what you imagine a Coen Brothers fever dream might look like? I feel like the marketing for it made it seem as though it were a straight send-up of old-Hollywood, when studios ran every detail of an actor’s life. And…it is. But crucially, it is a lot slower than the adverts make it seem. This isn’t a bad thing, per se, as it certainly makes for an unpredictable ride, but the satire is a lot more subtle than you had been led to believe.


The actual story is a kind of day-in-the-life of Eddie Mannix, manager/fixer/enforcer for Capitol Pictures. Eddie’s job ranges from enforcing the exclusivity of contracts with stars to ensuring work on the prestige piece Hail, Caesar!, to keeping the gossip mill running smoothly, but ensuring that the studio is staying in control at all times. Yet at the same time, you are always reminded that he does want to be a better man, to give up bad habits and spend more time at home. I have to say, I am not the greatest fan of Josh Brolin, but he did do well in this role.

The titular Hail, Caesar! stars our (kind of, sort of) protagonist  Baird Whitlock (George Clooney) and it is his kidnapping that kicks off the main chain of events that we follow. Clooney is hilarious as a lovable doof (see O Brother, Where Art Thou?, Burn After Reading) and you find yourself just hoping that he will maybe-ideally-please-oh-go-on-you-can-do-it realise he’s been kidnapped? Baird? No? Okay then. You go and have a nap, Baird. Except that, without Baird, the film cannot go on, and as the saying goes, the show MUST go on!

Peppered throughout the film are some amazing cameos – Scarlett Johanssen as a Betty Grable-type, Tilda Swinton as some kind of variation of Hedda Hopper, Channing Tatum as an ingénue in the mould of Gene Kelly (answering the question, what would Magic Mike look like if sailor suits were the only approved costume? The answer is obviously AMAZING but that’s beside the point) and Ralph Fines as acclaimed director Laurence Laurentz.

The film even delves (in fabulous fashion, naturally) into the Communist themes that were scattered throughout Hollywood of this era. These scenes build and build into what is just the greatest anti-climatic narrative climax – it sounds crazy, I know, but makes perfect sense in context.

Perhaps the funniest part of the whole film is a discussion between Mannix and some local religious leaders on the nature of God and faith. The interplay between these five characters is done in a classic Coen brothers fashion and everything just pops – particularly when trying to find a common consensus within the unlikely group.

I have to say, my favourite part of the whole film was Alden Ehrenreich as cowboy/film star Hobie Doyle. He was adorable! Hobie rose to fame in cowboy specials but is plucked out of his comfort zone and thrown into the deep end, into a Gentlemen Prefer Blondes-esque period piece. The fish-out-of-water stuff actually made me crack up in the theatre. He and Ralph Fiennes have an amazing tête a tête that is so on point, you can’t help but love it. He even manages to generate some spontaneous chemistry with Carlotta Valdez, a starlet who is being similarly repackaged by Capitol Pictures via Mannix.

So, in conclusion, I think…I liked it. A person’s enjoyment of it probably depends on how fond they are of the golden era of Hollywood. I’m still a little confused but I’m probably 70% of the way there. Yes…almost…