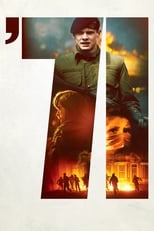 
This film is hella tense. I mean, seriously. The subject matter is tense anyway - young soldier mistakenly gets left behind on the streets of Belfast in 1971 in the midst of the Troubles - but wow, Yann Demange takes that tension and just runs away with it. His win for best Director at the 2014 British Independent Film Awards is so well deserved, I can't even tell you. In the scene right at the start, where the soldiers block off a street so that the British can search a house for weapons, you can feel your heartbeat getting more and more erratic. Really really terrifying stuff.

Jack O'Connell (memorably known for his turn in Starred Up) leads the film as Private Hook, the young soldier who must navigate the difficult terrain of Belfast, where foe looks much like friend, and vice versa. O'Connell is on screen for almost every minute of film - seriously, this schedule must have been gruelling - but man, does he ever stand up to it and take you with him, carrying the whole thing on his shoulders. In his scenes with the young Loyalist boy (whose name escapes me), you really see his bemusement at the situation he sees around him. His relative innocence about what he was entering (as you see at the start when he tells his young brother 'I'm not even leaving the country' in an attempt to reassure him, and his almost uplifting, compared to everything that comes later, training scenes) really wakens you to the idea that it was entirely possible for people to close their eyes and not understand what was taking place in Belfast at the time.

Hooks gets abandoned around 10 minutes into the film and the stakes only get raised from there  -  the conflicts within the IRA between young and old, bombs given to the loyalist fighters by Brits, mistaken identities, the inevitable intermingling at the upper levels of the IRA and the British Military Reaction Force and the backdoor deals that were made therein - the list just goes on. This is truly one of the most tense chase films I have seen in a long long time.

'71 really reminds you that the Troubles weren't all that long ago, though not in living memory for myself and my contemporaries. It wasn't so long ago that car bombs and blood in the streets (streets that have that frighteningly familiar red-bricked terraced look so common to much of Britain) were frequent. The idea that  it could happen again is seriously bloody terrifying.